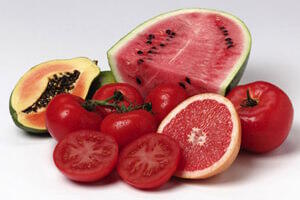 Part of the large family of carotenoids, lycopene is a natural pigment that gives tomatoes, watermelon, pink grapefruit and papaya their colour. Along with beta-carotene and lutein, it is one of the most abundant carotenoids in the blood and in certain human tissues. Recent epidemiological studies have linked higher lycopene consumption and blood levels to a lower risk of chronic diseases such as cancer and cardiovascular disease.

Lycopene is a particularly effective antioxidant at combatting the effects of free radicals - it is potentially twice as powerful as its close relative, beta-carotene, and ten times more powerful than alpha-tocopherol. A research team at Dusseldorf University has shown that lycopene is easily the most effective antioxidant at neutralising singlet oxygen, an especially aggressive free radical.
In a randomised, crossover study, healthy volunteers were given lycopene in the form of tomato juice, tomato sauce or natural-source supplements, one week’s treatment being alternated with one week’s break. Blood samples were taken at the beginning and end of each period.
Results showed a significant rise in serum lycopene levels in those given supplements. The increase after one week ranged from 75% to 145% compared with placebo. Alongside this increase in serum lycopene levels, researchers also observed a decrease in oxidation of lipids, LDL, proteins and DNA. This decrease in biomarkers of oxidation is an indication of lycopene’s in vivo antioxidant properties.

Other mechanisms of action

While lycopene’s antioxidant properties are principally responsible for its health benefits, studies are increasingly showing that other mechanisms are also involved.
At nutritional concentrations, lycopene may inhibit the growth of human cancer cells by interfering with cell growth progression factor - this is particularly the case with prostate cancer cells - without showing any evidence of toxic effects or apoptosis.
Lycopene’s regulation of the expression of connexin 43, a gene identified in studies 1 on animal and human cells, improves direct inter-cellular communication via gap-junctions. Restoring or regulating the impaired gap-junction communication seen in many human tumours is associated with a decrease in proliferation of tumour cells.

In a review2 of epidemiological literature published in 1999 on the links between consumption of tomatoes or tomato-based products and cancer, 57 of the 72 studies identified reported an inverse relation between such consumption and the risk of developing various cancers. In 35 of these studies, results were statistically significant. Evidence of lycopene’s benefits was strongest for prostate, lung and stomach cancer.
Data suggests that lycopene could also have a positive effect on cancers of the pancreas, colon, rectum, oesophagus, mouth and uterus.

Just as lutein is concentrated in the macula, so lycopene is concentrated in certain organs, in particular, the prostate. Studies have shown a lower incidence of prostate cancer in populations consuming large amounts of tomatoes and tomato-based products..
One study3 examined consumption of various dietary carotenoids among 47,894 health professionals free from prostate cancer to evaluate the risk of developing the disease. Lycopene was the only carotenoid seen to have an impact: the greater the amount consumed, the lower the risk of cancer..
. Scientists at the University of Berne report that in vitro, lycopene combined with vitamin E inhibits the growth of two different types of prostate cancer cell. Lycopene alone did not produce this effect. Several studies have linked lycopene with a lower risk of cancer. One, the Washington County Study, showed that men with the highest blood levels of lycopene had half the risk of prostate cancer as those with the lowest levels. In men under 70, the association was even stronger.
A research team at the Karmanos Cancer Institute in Detroit, Michigan, evaluated the effect of lycopene on patients with prostate cancer4. Thirty men who were due to undergo a prostatectomy were monitored for three weeks before their operation. They were randomly assigned to receive either 15 mg of lycopene twice a day in the form of a natural tomato extract, or a placebo. Following surgery, their prostates were analysed for any differences between the two groups. The researchers noted a reduction in tumour volume in the lycopene-supplemented group. Levels of PSA, a biological marker for prostate cancer, had also decreased.

Recent epidemiological studies have demonstrated an inverse relationship between consumption of tomatoes and lycopene, lycopene levels in blood and adipose tissue, and incidence of cardiovascular disease. A number of in vitro studies have indicated that lycopene can protect native LDL from oxidation and slow down cholesterol synthesis.
In a recent research report from the annual meeting of the American College of Cardiology, in which blood samples of more than 500 participants in the Women’s Health Study were analysed, those with the highest plasma lycopene levels were found to have a 33% lower risk of developing cardiovascular disease than those with the lowest levels.
In a randomised crossover study, 19 healthy adults (10 men and 9 women) - non-smokers and taking no medication or vitamin supplements - consumed traditional tomato-based products or nutritional supplements for one week. Doses of lycopene ranged from 20mg to 150mg a day. Irrespective of the source, consumption of lycopene increased serum levels of the nutrient and lowered oxidation of lipids, proteins and DNA.
Oxidation of LDL cholesterol decreased as serum lycopene levels increased. Since LDL oxidation plays a role in the formation of foam cells and the development of atherosclerosis, these results suggest increasing lycopene consumption may protect against heart disease and improve cardiovascular health.

Sources and bioavailability of lycopene

As the human body cannot produce lycopene, it must be obtained from the diet. In Nature, tomatoes are the richest source of this nutrient. Studies show that bioavailability of lycopene from raw tomatoes is less than that from tomato-based processed products. Bioavailability is enhanced further when the tomatoes are consumed with a little fat. In addition, studies suggest that absorption of pure synthetic lycopene is not as good as that of natural lycopene obtained from tomatoes.