Ubiquinol, the antioxidant form of CoQ10 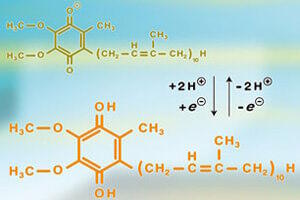 In a healthy person, over 90% of coenyzme Q10 is present in its reduced form - ubiquinol. Research shows that ubiquinol is also the most effective at neutralising free radicals and that it increases mitochondrial energy production. In addition, it has much greater bioavailability than the CoQ10 typically found in nutritional supplements.

Since it was discovered in 1957, CoQ10 has been widely studied because of the key role it plays in mitochondrial energy production. It exists in three redox states: a reduced CoQ10H2 form - ubiquinol-10, an oxidised form called ubiquinone-10 and an intermediate form, ubisemiquinone radical (Q°). Of the three, only the reduced form, CoQ10H2, has antioxidant properties. The plasma of healthy individuals contains a CoQ10H2:CoQ10 ratio of 95:5, demonstrating that the reduced form is clearly the active form. Both the reduced and oxidised forms are present in virtually all living cells.

Ubiquinol is more effective than ubiquinone in certain mechanisms

The body continually recycles its stores of CoQ10. When administered exogenously, CoQ10 is completely converted in its reduced, active form in the mitochondria and plasma membranes. Supplementation does not alter the 95:5 CoQ10H2:CoQ10 ratio in plasma.
Several studies examining plasma concentrations of ubiquinol and ubiquinone in individuals with various diseases (hyperlipidaemia, hepatitis, cirrhosis, coronary artery disease and diabetes) have observed a lower ratio of ubiquinol to ubiquinone in these patients compared with healthy individuals; in diabetics, for example, ubiquinol levels were 74% lower than in healthy controls.

It is the reduced form that the body uses to catalyse ATP production in the mitochondria. In addition, in order for coenzyme Q10 to trap and neutralise free radicals - particularly the highly reactive hydroxyl radical and superoxide radical - and so protect the integrity of cell membrane lipids and their mitochondria, it must first be converted into its reduced form. With respect to these two principal mechanisms of action (the ability to catalyse ATP production in the mitochondria and act as a fat-soluble antioxidant), ubiquinol is considerably more effective than ubiquinone, the oxidised form of CoQ10, which till now has been the only form found in nutritional supplements.

When taken in the reduced form, higher blood levels of CoQ10 can be achieved with lower doses. Studies of assimilation in rats showed absorption to be twice as high from oral ubiquinol as from conventional CoQ10 (ubiquinone) 1. Studies of assimilation in humans are even more impressive. When healthy Japanese volunteers were given a daily supplement of just 150mg of ubiquinol, CoQ10 blood levels increased to 3.84 mcg/ml, and in those given 300mg, they reached 7.28 mcg/ml. Ubiquinol was effectively and rapidly absorbed by the gastrointestinal system and desirable levels were achieved in just four weeks 2.
One clinical study found that it took 1200mg/day of ubiquinone to obtain blood concentrations of 3.96 mcg/ml, whereas in the previously-mentioned research, it required only 150 mg of ubiquinol to obtain such elevated blood concentrations.
Supplementing with ubiquinol raises not only its level in the blood but also its ratio within total CoQ10, to 96% or 98% as compared to around 80% to 85% with ubiquinone. In addition, this ratio remains stable when ubiquinone is taken.
Even a slight increase in ubiquinol’s ratio in the blood can have important implications - in the case of enzymes, an increase of just 3-5% can produce powerful biological effects. Supplementation with ubiquinol results in an increase of 12% in the ubiquinol ratio within total CoQ10.

Ubiquinol remains in the body longer

Animal and human studies not only suggest that ubiquinol is much better absorbed than ubiquinone but also that it is retained by the body for considerably longer.
In a study on aged rats, equal doses of ubiquinone and ubiquinol were orally administered in order to evaluate how long the latter would remain at elevated levels in the blood. This data might also shed light on why ubiquinol demonstrates superior biological effects than ubiquinone. The study showed that ingestion of ubiquinol increased its level in the blood by over 90%, an increase which was sustained during the study’s 8 hour duration. Ingestion of an equal dose of ubiquinone produced no such increase. 3.
Following modest ubiquinol supplementation (equivalent to 100mg/day in humans), CoQ10 blood levels reached 6.0mcg/ml and fell to 4.5mcg/ml after the 8 hours. In the group given the same dose of ubiquinone, blood levels reached just 2.1mcg/ml and decreased to 1.2mcg/ml after 8 hours. In this study, the concentration of ubiquinol after 8 hours was 3.75 times higher than that of ubiquinone.

Ubiquinone and ubiquinol are chemically different in that the latter has two hydroxyl groups making it more hydrophilic than ubiquinone and thus more easily assimilated. The presence of these two hydroxyl groups on the ubiquinol compound results in it having stronger bonding with water and helps explain its superior bioavailability. Once ingested, it is also absorbed much more easily into the bloodstream.
This more hydrophilic form of CoQ10 has also been shown to be more stable in lipid bilayers of cells and may be very well dispersed in the mitochondria.
Ubiquinol’s greater hydrophilic properties probably allow it to be better absorbed by cells, resulting in the specific targeting of the mitochondria within cells. In other words, since ubiquinol is more hydrophilic (that is, less capable of dissolving in fats), it would theoretically tend to be retained less in cell membranes, and achieve more significant concentrations in cells. This may be a potential mechanism through which ubiquinol might accumulate more effectively than ubiquinone within mitochondria.

Ubiquinol appears to prevent both the initiation and propagation of lipid peroxidation, while alpha-tocopherol only inhibits its propagation. Its localisation in the hydrophobic region of the phospholipid bi-layer of cellular membranes (a key site for initiation and propagation), makes ubiquinol particularly well-situated for accomplishing these two functions. In addition, its effect is boosted by access to the powerful enzymatic mechanism of the ubiquinol cycle - the recycling of ubiquinone between its oxidised, reduced and SQH intermediate forms, from the ubiquinone reservoir.
Ubiquinol may therefore be the only known fat-soluble antioxidant that cells can synthesize de novo and for which there exist enzymatic mechanisms that enable regeneration of the antioxidant form responsible for its inhibitory effect on lipid peroxidation. These characteristics, along with its considerable presence in biological membranes and LDL make it a more effective antioxidant than alpha-tocopherol, suggesting it plays an important role in cellular defence against oxidative stress-induced damage. Ubiquinol can also regenerate vitamin E 4.
When LDL is exposed to oxidative stress, ubiquinol is the first antioxidant expended. The densest particle (LDL3), also considered the most susceptible to oxidation and most atherogenic, has the lowest ubiquinol content.

The ageing process is accompanied both by a decrease in the body’s ability to produce and metabolise CoQ10 and an increased risk of many degenerative diseases. There are many reasons for this decline, notably an increase in metabolic demand, diseases, inadequate dietary intake of CoQ10, deficiencies in the precursors and enzymes necessary for its biosynthesis, genetic mutations and oxidative stress. Some data suggest the decline in CoQ10 begins around the age of 40, although it is also believed to start as early as our twenties, with a slow but continuous decline thereafter 5. This results in reduced energy (ATP production), a slowing down of CoQ10’s conversion into its reduced form and decreased protection against oxidative attack. Providing as it does a strong first line of defence against cellular oxidative stress, ubiquinol must therefore be replenished or provided through supplementation to ensure optimal health is maintained.

Slows down the ageing process

It has long been theorised that many of the harmful effects of ageing might be delayed if only we could maintain youthful levels of mitochondrial energy - and CoQ10 plays a critical role in the healthy production of mitochondrial energy.
To evaluate ubiquinol’s anti-ageing effects, researchers conducted a meticulous study of senescence-accelerated mice. The mouse model selected allows rapid identification of compounds likely to slow down ageing. Senescence-accelerated mice develop normally but show early signs of ageing, including reduced physical activity, loss of hair and glossiness, rough skin, ocular lesions and curvature of the spine.
The mice in this study were divided into three groups. From the age of two months, the first was fed a standard diet, the second a standard diet enriched with ubiquinone and the third a standard diet fortified with ubiquinol. The ageing rate of each group was recorded using a grading score.
As might have been expected, the ageing rate accelerated sharply from the age of three months in the control group while in those receiving either form of CoQ10, the ageing rate was slower. At middle age (around nine months), the grading score of the control group rose to 10 whereas that of the two supplemented groups only reached 5.5. Mice fed a fortified diet thus experienced a 45% slower ageing rate than that of the control animals.
From the age of 10 months, a significant difference was observed between the two forms of CoQ10. The grading score of the control mice rose to 12, that of the animals receiving ubiquinone increased to 9.9 while the mice given ubiquinol recorded a maximum score of just 5.9. This means that from middle-age, the ubiquinol-supplemented mice aged 51% more slowly than the control mice and 40% more slowly than the ubiquinone mice. At 12 months, the difference was even more pronounced: the ubiquinol mice appeared to be in excellent health, while visible degenerative changes were observed in those receiving ubiquinone and the control group looked awful. Ubiquinol’s ability to remain at constantly high levels in the bloodstream may explain its remarkable anti-ageing effects which are much greater than those of ubiquinone.

Scientists compared the anti-fatigue effects of ubiquinol and ubiquinone in aged rats by measuring how long they could run on a treadmill. In this crossover study, the running time of animals in a control group receiving no CoQ10 showed a slight decrease, while in those given ubiquinone it increased by 60% and in those receiving ubiquinol by a massive 150%. 7.

The advantage of lower doses

A number of clinical studies using relatively high doses of ubiquinone have demonstrated neurological benefits from CoQ10. A pilot study was conducted on 80 subjects with mild Parkinson’s disease which showed significant improvements from a daily dose of 1,200 mg ubiquinone, the oxidised form of CoQ10 apparently slowing down decline in function8. However, 1,200 mg a day is a substantial - and expensive - dose. Achieving similar improvements from much lower doses of ubiquinol could be highly beneficial.

Ubiquinol, ubiquinone and idebenone each have a role to play

The two forms of CoQ10, ubiquinol and ubiquinone, are both biologically active. They are both active redox cofactors and play an important metabolic role in the interconversion from one form to another. Ubiquinol is essential for maintaining energy, homeostasis, cell growth, development and viability, but all forms of CoQ10 are active and have specific roles in target areas. Ubiquinone is equally very important. As for idebenone, an analogue of CoQ10, it provides powerful antioxidant protection in situations of hypoxia where CoQ10 is completely ineffective. It can also increase nerve cell growth factor and stimulate cholinergic activity, thus boosting cognitive ability.