menuSubjects
Welcome   >  Digestion and oro-gastro-intestinal health  >  New discovery on the...

New discovery on the immune system and gut flora 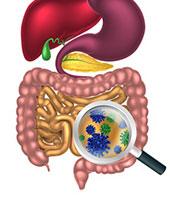 The immune system is a complex network, the role of which is to defend the body against pathogenic germs. It distinguishes between the body's own cells referred to as ‘self’, and foreign cells – called ‘non-self’, by means of a number of immune cells, the best-known of which are white cells or leukocytes. Scientists have discovered highly specific leukocytes in the intestines called CD4+CD8αα intestinal intraepithelial lymphocytes. According to a study published in August 2017 in the journal Science1, the action of these immune cells may be highly dependent on gut flora, and more specifically on a strain of probiotics called Lactobacillus reuteri. Here we explore this discovery and the link between the immune system and intestinal flora.

New class of immune cells in the gut

Key role in process of tolerance

Located in the epithelium of the small intestine, CD4+CD8αα+ intestinal intraepithelial lymphocytes may be involved in the process of tolerance. This is a mechanism studied extensively in immunology, and with good cause, since it enables the body to tolerate ‘self’ cells, in other words, to prevent the destruction of healthy cells. However, this tolerance is also applied to pathogens. In efforts to prevent this from happening, a number of scientists have investigated the role played by CD4+CD8αα+ intestinal intraepithelial lymphocytes in this process of tolerance. 2

These new discoveries confirm the role and importance of the bacterial strain Lactobacillus reuteri in the intestinal immune system. It may play a part in the process of tolerance by indirectly activating differentiation of CD4+ T lymphocytes into CD4+CD8αα+ lymphocytes. According to the researchers, this differentiation may require the presence of tryptophan, an amino acid known for being the precursor of several molecules in the body. An adequate intake of Lactobacillus reuteri and tryptophan may thus offer significant benefits for boosting the intestinal immune system.

Essential amino acid and precursor of serotonin, melatonin and niacin.