menuSubjects
Welcome   >  Heart and circulation  >  Circulation: the benefits of...

Circulation: the benefits of edible mushrooms 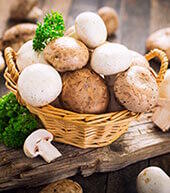 A few months ago, we reported on the untold virtues of mushrooms. We didn’t have to wait long for yet more evidence of their health benefits. Scientists have just highlighted their role in improving blood circulation and fighting certain cardiovascular diseases. Published in The FASEB Journal, this new research focused on the effects of two edible mushrooms: the portobello and the shiitake1. Let’s take a look at what it discovered.

While mushrooms have been the subject of numerous studies in recent years, few studies have explored their potential in combatting atherogenesis. This pathological process is essentially the formation on artery walls of fatty plaques called atheromas. Eventually, these plaques can cause complications such as obstruction of the artery, or lesions on the artery wall – this is known as atherosclerosis. Scientific research has identified a number of therapeutic solutions, including natural options, to help combat such deterioration of the arteries. Most of these feature in our plan of attack against atherosclerosis, but we can now add two mushrooms to the list: portobello and shiitake. In evaluating their efficacy in preventing the onset of atherosclerosis, scientists measured the effects in mice of 16 weeks’ supplementation with these mushrooms. The mice were divided into five groups: Positive results observed with shiitake supplementation

Beneficial effect on lipid metabolism
On completion of their analysis, the researchers reported a number of beneficial effects for circulation and the prevention of cardiovascular disease. Compared with the two control groups, mice supplemented with the portobello and shiitake mushroom powder displayed a lower gain in body weight, with a more pronounced effect seen in the shiitake mushroom group. Lean mass was not significantly affected by supplementation. This suggests that the mushrooms act only on fat metabolism, which represents a significant asset in the fight against hyperlipidaemia and in maintaining healthy vascularisation, and thus preventing cardiovascular diseases such as atherosclerosis.
Protective effect against atherosclerosis
As well as acting positively on fat metabolism, the active principles in mushrooms may offer other benefits for the prevention of atherosclerosis. The researchers observed that the mice supplemented with shiitake mushroom powder had fewer aortic lesions than control mice fed a high-fat diet.

This study highlights the benefits of supplementing with shiitake mushroom powder. In preventing fatty deposits in the arteries, such supplementation could help both maintain healthy circulation and prevent cardiovascular diseases such as atherosclerosis. According to the researchers, these beneficial effects may be linked to the mushroom’s many bioactive compounds, including (ergothioneine. This powerful natural antioxidant has already been proven to combat oxidative stress and certain types of inflammation.