menuSubjects
Welcome   >  Heart and circulation  >  The importance of iron...

The importance of iron in reducing the risk of cardiovascular disease 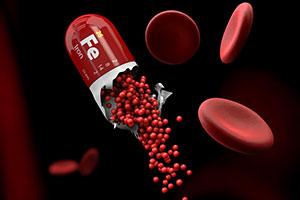 Ensuring a good intake of iron may be even more critical than we thought. While this trace element is recognised as being essential to good health, the risks of disease posed by iron deficiency are often overlooked. In this context, scientists confirmed the link between iron status and risk of cardiovascular disease. Using a modern analytical technique based on genetic variants, they demonstrated that an adequate iron intake may prevent the onset of coronary disease, a form of cardiovascular disease which affects the arteries supplying blood to the heart. Read on to discover more about the methods, results and prospects identified by this study, published in the specialist journal Arteriosclerosis, Thrombosis, and Vascular Biology1.

In testing the hypothesis that a link does indeed exist between iron status and risk of coronary disease, the researchers behind this study faced a number of challenges, including risk of epidemiological bias and the complexity of iron status. This trace element actually exists in various forms in the body. Involved in numerous biological functions, it is primarily present in the structures of haemoglobin in red blood cells, myoglobin in muscles and several enzymes in the human body. While the majority of iron is locked up in haemoglobin, a significant amount is stored in tissues or bound to carrier proteins. In order to evaluate iron status, assessment must therefore take into account a number of parameters such as serum iron levels – iron circulating in the blood, levels of ferritin – a substance that enables iron to be stored in the body, and the binding ability and saturation of transferrin, an iron carrier.

Modern analytical method based on the main principles of genetics

In order to investigate the complex causality link between iron status and cardiovascular disease, the researchers used an innovative analytical technique called Mendelian randomization. This novel method is based on the three ‘laws’ of Mendel which explain how genes and hereditary characteristics are passed on from one generation to another. On the basis of these core genetic principles, Mendelian randomization allows scientists to study the impact of a phenotype on a disease - in this case, the causality effect of iron status on coronary disease. Compared with other techniques, Mendelian randomization enables the scientific study of complex causality issues, avoiding epidemiological bias such as non-measurable variables and reverse causality effects.

Study of HFE and TMPRSS6 genes

Using this technique, the researchers succeeded in reliably estimating the cause and effect link between iron status and the development of coronary disease. They identified three loci or specific sites on particular genes called HFE and TMPRSS6. These two genes code for proteins involved in the homeostasis of iron – in other words, they play a key role in regulating the absorption, transport, storage and recycling of iron in the body. The scientists also selected these particular genes because of the many studies conducted on mutations of these genes. Genetic variations in HFE and TMPRSS6 have in fact been implicated in iron homeostasis imbalance and the onset of certain diseases.

To confirm the merits of their study, the researchers first verified the principle of their analysis by Mendelian randomization by looking at the link between genetic variations in HFE and TMPRSS6 and iron status in a sample of almost 50,000 individuals. Once their method had been validated, they analysed the impact of genetic changes on the risk of coronary disease. Their study involved a sample of over 400,000 people, certain of whom presented with coronary problems. Using this large-scale analysis, the researchers were able to confirm the link between iron status and risk of coronary disease, noting that a higher iron levels were associated with a lower risk of cardiovascular disease.

This new study provides convincing evidence of the benefits of adequate iron intake for preventing coronary disease, and offers a new therapeutic approach. It supports the findings of numerous other studies on the consequences of iron deficiency-related anaemia. Although the most common form of the disease, iron deficiency anaemia can often be confused with other health problems and remain undiagnosed. Mild iron deficiency anaemia may manifest in fatigue, shortness of breath, increased heart rate or headaches. While it may not be serious, without adequate treatment it can get worse and bring complications such as cardiac problems. That is why iron supplementation has been used preventively and therapeutically for many years. These new findings provided by Mendelian randomization confirm the importance of adequate iron levels in maintaining good cardiovascular health.

A number of nutritional supplements have been developed over recent years to help us maintain or restore normal iron levels. One such product is: Iron Bisglycinate, a highly-bioavailable supplement. This can be combined with Lactoferin, a natural glycoprotein that has been shown to aid iron absorption.