The incredibly versatile benefits of turmeric (2/2) 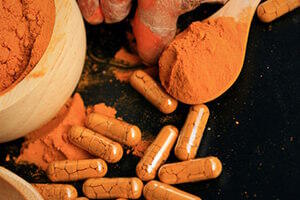 In India, turmeric is used to treat a wide variety of ailments including gastrointestinal problems, inflammation, headaches, infections and colds. It is turmeric’s curcuminoid content, particularly curcumin, which is responsible for its numerous and wide-ranging health benefits. From improving digestive function and supporting liver detox processes, to conferring powerful anti-inflammatory effects on the joints, standardised extracts of curcuma longa have more than earned their place among your natural pharmacy choices!

A double-blind study of 116 subjects conducted in Thailand compared the effects of 500mg of curcumin, given four times a day, with those of a placebo. After seven days, 87% of the curcumin group reported that their dyspepsia symptoms had either partly or completely gone, compared with 53% in the placebo group 1. In cases such as this, turmeric supplements can be taken with meals, on their own or in combination with digestive enzymes taken at the start of each meal.

In a month-long study, laboratory rats were divided into four groups and given either fish oil + ethanol (FE), fish oil + dextrose (FD), FE + curcumin or FD + curcumin.
While the rats given FE were found to have necrotic and inflamed fatty livers, the addition of curcumin prevented the alcohol-induced necrosis and inflammation. The extent of steatosis (fatty liver) also decreased in the curcumin-treated rats and there was no sign of liver damage in either of these groups. According to the researchers, this study is the first to show that curcumin can prevent alcoholic liver disease.
This preventive effect may be the result, at least in part, of curcumin’s inhibition of lipid peroxidation and activation of nuclear factor Kappa-B, involved in number of alcohol-sensitive tissues.

In another study, researchers discovered that curcumin reduced trichloroethylene-induced oxidative stress in mouse livers. Curcumin’s ability to both stem the increase in cell levels of peroxisome, a compound associated with oxygen use by cells2, as well as stimulate glutathione synthesis3 appears to be responsible.

In this context, turmeric supplementation perfectly complements the effects of SAM-e or those of Desmodium and Silymarine.

For a balanced lipid profile

Curcumin’s cholesterol-lowering ability has been the subject of extensive research over recent years. It actually reduces cholesterol by interfering with its absorption in the gut, by accelerating the transport of peripheral and tissue cholesterol towards the liver, and by increasing its elimination via bile salts.
An Indian study of 10 curcumin-supplemented volunteers showed a 29% increase in HDL levels after just seven days’ supplementation. Over the same period, total cholesterol fell by 11.6% and lipid peroxidation decreased by 33%4.

Oxidation of LDL-cholesterol is also a significant factor in the development of atherosclerosis. Scientists have found that in vivo, curcumin was not only able to lower levels of LDL- and total cholesterol, but also had a protective effect against lipid peroxidation of sub-cellular membranes 4.
In a Spanish study, 18 rabbits were fed a high-cholesterol diet in order to induce atherosclerosis. They were then divided into three groups – the first receiving 1.66mg of curcumin per kilo of bodyweight, the second 3.2mg and the third serving as a control group. After seven weeks, the researchers found that in the group given the lower dose of curcumin, LDL sensitivity to oxidation had decreased and that cholesterol levels were lower in both the supplemented groupssup>5.

A meta-analysis6, involving a total of almost 350 individuals reviewed the effects of curcuminoids on participants’ C-reactive protein (CRP) levels. CRP is a key marker of inflammation and an important risk factor in cardiovascular disease and atherosclerosis.
Analysis of results from various clinical trials showed that in those studies conducted for a minimum of four weeks, supplementation with curcuminoids was associated with a significant reduction in CRP levels compared with placebo. The mechanisms involved may include suppressed production and release of pro-inflammatory cytokines.

A preliminary study of rheumatoid arthritis sufferers showed that curcumin reduced inflammation and symptoms such as pain and stiffness7.
Curcumin blocks both the Cox-2 and Lox pathways in inflammation by directly modulating metabolism of arachidonic acid. It is also able to inhibit the activation of a transcription factor, NF-kB, a powerful driver of chronic inflammation8.
Curcumin’s anti-inflammatory properties were investigated in a double-blind study of 49 patients with rheumatoid arthritis. One group was given 1200mg/day of curcumin for 5-6 weeks, while the other group received 300mg/day of phenylbutazone, an anti-inflammatory drug. Similarly significant improvements were noted in both groups, including a decrease in morning stiffness, an increase in walking time before subjects became fatigued, and improvements in joint swelling9.

An antioxidant weapon for the brain

Among the body’s antioxidant-regulating genes is hemeoxygenase-1 (HO-1), a gene that protects brain cells from free radical attack. In previous studies, curcumin was shown to strongly promote the expression and activity of HO-1 in rat cells, suggesting it may help counter the effects of oxidation.

Scientists therefore examined curcumin’s neuroprotective effects and its ability to trigger the HO-1 response in cultures of hippocampus neurons. Curcumin treatment was found to produce increased expression of both HO-1 and antioxidant enzymes. Pre-incubation with curcumin resulted in an enhanced cellular resistance to oxidative damage

According to the researchers, curcumin could be used therapeutically as a potent stimulant of HO-1, potentially protecting brain cells from oxidative damage10.

In another study, rats were given streptozotocin to induce oxidative damage in their brains, to serve as an experimental model of dementia. They were then given 80mg of curcumin per kg/bodyweight or a placebo for three weeks. After two weeks’ streptozotocin administration, the rats exhibited significant cognitive impairment, but the curcumin-supplemented group performed significantly better than the controls, and their markers of oxidative stress were considerably lower. The curcumin also led to increases in glutathione levels and the enzymes responsible for its regeneration, in specific areas of the brain such as the hippocampus and cerebral cortex. In addition, it enhanced the activity of acetyltransferase choline, an important enzyme for acetylcholine synthesis. Reduced acetylcholine levels are thought to play a role in the development of Alzheimer’s disease11.

In this context, it may be preferable to enhance the effects of turmeric extracts by combining them with other similarly effective molecules such asphosphatidylserine, l’huperzine A or vinpocetine.

A key characteristic of Alzheimer’s disease is the accumulation in the brain of beta-amyloid – a malformed protein. Macrophages are normally able to identify, engulf and destroy malformed proteins but for reasons which are not yet entirely clear, they are not able to recognise - and thus eliminate - beta-amyloid.
In research on laboratory mice fed a curcumin-enriched diet, researchers observed that the nutrient was able to reduce beta-amyloid deposits in the brain and increase their elimination. The fact that curcumin easily crosses the blood-brain barrier and binds directly to the plaques is undoubtedly a key factor here12.
What’s more, when low doses of curcumin were added to human beta-amyloid in test tubes, the researchers found that the curcumin stopped the protein from aggregating, and prevented the formation of amyloid fibres which make up plaques.
These results suggest that curcumin may be able to both ‘treat’ Alzheimer’s disease as well as reduce the risk of developing it in the first place13.
Other research supports these findings. Scientists tested the anti-amyloid activity of macrophage samples taken from Alzheimer’s patients. After incubating them with curcumin, absorption of beta-amyloid by macrophages was found to be significantly increased in half the subjects tested. Curcuminoids boost the binding of macrophages to beta-amyloid. In addition, vitamin D may stimulate beta-amyloid absorption by macrophages in the majority of patients14.
Curcumin may therefore exert a protective effect against the development of Alzheimer’s disease, and could even help reverse the progress of existing disease15.

Supplementing with turmeric may be even more effective if combined with PQQ (Pyrroloquinoline quinone) and Co-enzyme Q10.

Heart failure occurs when the heart can no longer pump blood around the body properly. It can lead to hypertrophy of the cardiac muscle producing symptoms such as fatigue and oedema.
Japanese scientists tested curcumin in two models of heart failure: in salt-sensitive rats with heart disease associated with elevated blood pressure, and in rats which had had surgically-induced heart attacks. In both cases, the curcumin prevented heart failure-induced increases in thickening of the cardiac muscle wall. The researchers attributed curcumin’s mechanism to inhibition of an enzyme called p300 HAT (histone acetyltransferase).
In a second study, Canadian researchers examined the effects of curcumin in mouse models of heart failure, and in cultured rat fibroblasts and cardiac muscle cells. Curcumin was able to prevent and help reverse hypertrophy of the cardiac muscle in supplemented animals, even when the treatment did not begin until two weeks after induction of heart failure. They also found curcumin suppressed p300 HAT activity16.

In the case of heart failure, turmeric extracts can be taken in combination with taurine andastragaloside IVsupplements to good effect.

A five-week study was conducted on male mice fed a high-fat diet to induce obesity, and obese female mice deficient in leptin. Normal weight mice, fed a low-fat diet, served as controls. The animals were then divided into two groups, with one group fed a diet enriched with high dose curcumin.
Based on test results of tolerance to glucose, insulin and glycaemia, the curcumin-supplemented mice were found to have a lower risk of developing diabetes. In addition, they showed a small decrease in weight and fat mass, even when their calorie intake was identical to, or higher than that of the non-supplemented animals. The obese, curcumin-supplemented mice also had less inflammation in the liver and fatty tissue than non-supplemented mice.
Inflammation is thought to play a role in the onset of diabetes and obesity. According to the researchers, curcumin could help prevent diabetes by reducing the inflammation associated with obesity.
Curcumin may thus improve insulin sensitivity of the muscles and liver, and also prevent some of the harmful effects of obesity by reducing numbers and activity of inflammatory cytokines produced by fatty tissue immune cells which can damage the insulin-producing islet cells of the pancreas17.

To improve insulin sensitivity, it is generally advisable to combine turmeric supplements with berberine which also plays a key role in the prevention and natural treatment of diabetes.

This is a condition in which the middle layer of the eye is inflamed, in particular the area including the iris. In a 12-week study, 375mg of curcumin was administered orally, three times a day, to 53 patients with chronic anterior uveitis. 90% of the patients who completed the study reported improvements in their symptoms.
In another study, 32 patients with the disease were divided into two groups, one of which received curcumin only, and the other a combination of curcumin and anti-tubercular treatment. Somewhat surprisingly, all the curcumin-only patients reported an improvement in their condition, compared with 86% of those receiving the combination therapy. The researchers concluded that curcumin was as effective as corticosteroid therapy, the only treatment currently available to treat chronic anterior uveitis. They added that the absence of any side effects with curcumin was its greatest advantage over corticosteroids18.

In research conducted on rats and rabbits, curcumin - even at low-doses - was effective at inhibiting chemically-induced cataracts19. And a 14-day study on rats similarly showed that curcumin-supplemented animals had greater resistance to induced opacification than controls20.

Supplementing withlutein and zeaxanthin protects against the onset and development of cataracts and acts synergistically with turmeric extracts standardised in curcumin.