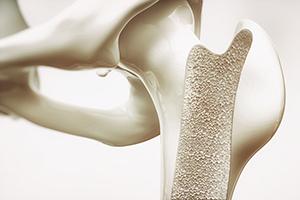 Every year since 1998, World Osteoporosis Day has taken place on 20 October. An initiative of the International Osteoporosis Foundation, it is designed to promote the prevention of metabolic bone diseases such as osteoporosis1. This is no small challenge since under-diagnosis of this bone disease remains an issue. Often, it is only detected when early complications become apparent. Scientific experts estimate that this silent disease affects tens of millions of people2 and is responsible for almost 10 million fractures each year3. It’s no surprise then that prevention of osteoporosis has become a priority for a number of specialists. How can we maintain healthy bones? How can we improve bone density? And how can we prevent the effects of osteoporosis? Drawing on an article in the specialist journalCurrent Osteoporosis Reports4, we report below on the latest research findings in the field.

Meeting your calcium needs to prevent osteoporosis
When we talk about bone health, we usually think of the mineral calcium. A component of bones, calcium is essential for their mineralisation, growth and health. Ensuring an optimal intake of calcium is therefore important for preventing bone diseases such as osteoporosis, yet deficiency is by no means uncommon. A lack of calcium - whether related to age or the result of poor diet – can, however, be prevented or corrected with the aid of nutritional supplementation. Calcium supplements are available in various forms including calcium orotate.

Improving calcium absorption with vitamins D and K
Before it can be stored in bones, calcium must first be absorbed in the intestine. This is where vitamin K and vitamin D come in. Sometimes referred to as the ‘sunshine vitamin’, vitamin D is primarily produced by the body on exposure to the sun’s UV rays. Unfortunately, conditions are not always conducive to vitamin D production, and in addition, individual synthesis varies, particularly depending on age. Additional dietary intake may therefore be necessary. While vitamin D is found in certain everyday foods, dietary supplements have also been developed to prevent or correct deficiency. Such formulations are produced from vitamin D3, a form of vitamin D with high bioavailability.

Benefits of silicon for the bones
While less well-known than calcium, potassium and magnesium, the mineral silicon is also beneficial for bone health, as demonstrated by several studies conducted since the 1970s. In one such study, improvements were observed in the bone density of individuals taking silicon supplements. Combined with an optimal intake of vitamin D and calcium, silicon supplementation offers a number of benefits for preventing and treating bone diseases including osteoporosis. Silicon is available for strengthening bones in the form of a water-soluble nutritional supplement called orthosilicic acid.

Discovery of bone morphogenetic proteins
Minerals are not the only nutrients affecting bone density. Scientists have also investigated the role of proteins in combatting bone loss. Low protein consumption among elderly people has been linked to an increased risk of fracture. For around 40 years, specific proteins called bone morphogenetic proteins have also been studied for their potential in preventing and treating osteoporosis. Discovered by the orthopaedic surgeon Marshal Urist, these proteins have been the subject of numerous scientific papers5. Published in the prestigious journal Science, one such paper reported an association between bone morphogenetic proteins and new-bone formation by auto-induction; in other words, these proteins were able to regenerate bone. The benefits of this major scientific advance are now offered in the form of a complex, available from the SuperSmart catalogue, called Bone Morphogenetic Proteins.

Osteo-protective effects of antioxidants
If the above-mentioned nutrients are important for bone formation, other molecules have been identified as offering protective effects for the bones, including several natural antioxidants. Among them are various carotenoids such as beta-carotene, lutein, zeaxanthin and lycopene. Combined in a single complex called Carottol™, available from SuperSmart, these antioxidants have been shown by a number of in vitro and in vivo studies to have osteo-protective effects. One cohort study showed lycopene supplementation to be associated with a 34% lower risk of non-vertebral fracture.

Benefits of vitamin C for the bones

Along with carotenoids, other powerful antioxidants have also been studied for their osteo-protective effects. Vitamin C, for example, has demonstrated dual-effect protection for the bones. Its antioxidant action helps suppress the activity of osteoclasts, responsible for bone destruction, and it also promotes differentiation of osteoblasts, the cells involved in bone formation. One study showed that optimal vitamin C intake may reduce the risk of fracture by up to 70%. Suffice to say that vitamin C offers considerable benefits for bone health and the prevention of fractures. To ensure an optimal intake, there are various vitamin C supplements on offer such as the latest generation formulationLiposomal Vitamin C.

Like vitamin C, resveratrol may also help prevent bone loss by inhibiting osteoclast formation and promoting osteoblast differentiation. In a 16-week study of adult males, an increase in bone density was observed in subjects supplemented with trans-resveratrol.

Together, these studies and discoveries confirm the importance of optimal nutrition for maintaining healthy bones. It is on this basis that SuperSmart has developed the product Super Bone Formula, an enhanced formulation for maintaining and improving bone density. Amongst others, it contains calcium, magnesium, and vitamins K and D. For optimal efficacy, it can be combined with other formulations mentioned in this article, particularly those containing antioxidants.

Most easily-assimilated form of this essential mineral

Cyplexinol® For complete regeneration of the osteo-articular system